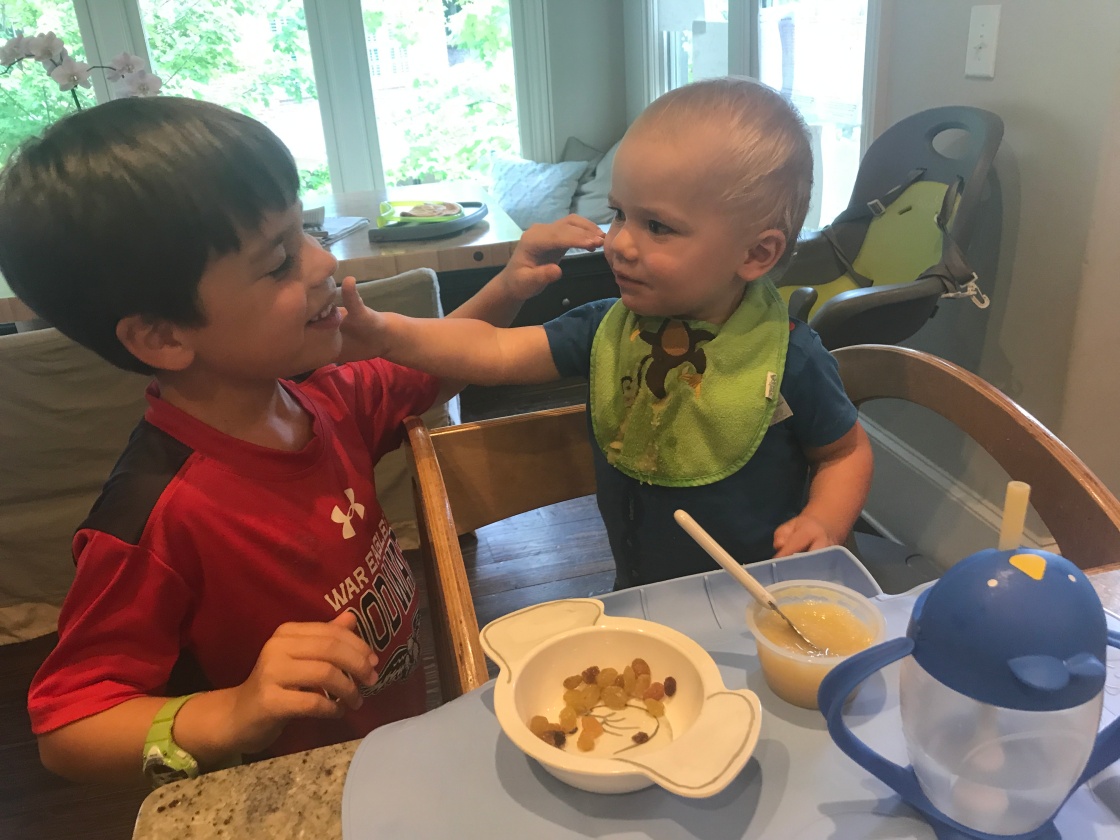 G
reetings from Camp Boredom where the Millers are anything but bored! Four weeks into our summer of intentional boredom (how does boredom pass so fast?!) and many parents are itching like a kid covered in bug bites for the Camp Director’s update.

I gather there’s a well-founded fear that my campers  — and the Camp Director — may not come out of this camp alive. Or perhaps what’s closer to the truth: The Camp Director may not be sane for enrolling her kids in a camp, well, that’s not a real camp.

The good news is no one got eaten by the Spatula Monster (more on that later). The more surprising news is this Camp Director is sane enough to report that Camp Boredom has been so enjoyable, I’ve signed up my kids for Camp S’moreBoredom for two weeks in July. There are limitless spots left so feel free to join us in the fun! (Camp Cousin starts July 15.)

Beware, though, at this camp you might hear people saying strange things. Instead of saying, “Hurry, kids, let’s go! LET’S GO! I don’t have all day!”… you’ll hear the opposite, “You’ve got all day, kids! Go play!”

The day starts out a lot like sitting around a campfire, dreaming up new ideas and places to explore. By the end of the day, your kids are dancing with spice jars they’re calling candlesticks and singing, “This Little Light of Mine, I’m Gonna Let It Shine.”

On a serious note, the beauty of being intentionally bored is I’ve come to know my children in a more intimate way — by observing them, rather than directing them. I’m watching them find their true passions, create their own masterpieces and forge their own friendships — with each other.

I will admit everyone gets a little crazy around 5 o’clock, because it’s snack time somewhere, at least according to my kids. That’s when Mommy usually gets her second round of tea with a dollop of honey — which reminds me to be a little sweeter and a little less sour.

This wouldn’t be a camp update without a few pictures (and a guinea pig video) of all the unbelievable boredom that we’ve enjoyed. Now, it’s your turn to witness some of the Miller memories this summer. Just watch out for the Spatula Monster!

Kirkham is a big dreamer. From crafting candles out of spice jars to sculpting bowls out of ice, Kirkham’s wild imagination brings us all great joy. If you care to get creative like Kirkham, just put water in a bowl and add a few drops of food coloring. Stir, cover with plastic wrap and freeze it. When frozen, start sculpting. I cannot take credit for any of this. In fact, I almost put an end to it. But then I reminded myself as Camp Director of Camp Boredom, creativity should be encouraged — a true test of Mommy Miller’s patience!

My favorite Camp Boredom discovery: Boredom leads to bonding. The most beautiful part of Camp Boredom is witnessing the bonds grow between my children. Below I discovered Boone reading to his younger brother, keeping him company as they waited for Mommy to come to the rescue.

Boone is a loyal, loving friend. Thanks to sweet Boone, the Millers have a new morning ritual here at Camp Boredom. Every day starts with Fuzzy and Digger, our two pet guinea pigs, enjoying some free play outside their cage. (Hmmm, I wonder where Boone got the free play idea.) Ok, letting the guinea pigs loose was definitely not Mommy’s idea. But I’ve embraced it and I’ve actually grown to love it, too. Listen to Boone and Valentina professing their love for Fuzzy in the video below. It’s priceless.

Valentina loves deeply. Valentina is clearly outnumbered by her three brothers. But she can hang with the boys, the neighborhood girls — and the guinea pigs, too. She loves to wrestle with her brothers as much as she loves to whisper sweet-somethings in your ear. She also appears to have fallen in love with a few imaginary friends, asking them to follow her downstairs as soon as she wakes up. WARNING: The effects of Camp Boredom can increase the size of your family!

Tucker loves having all the family HOME. Camp Boredom has helped even the littlest Miller grow up, trading in his pacifier for the unexpected. As I was unloading the dishwasher one morning, Tucker got hold of the spatula. Before I realized I’d been robbed, a Camp Boredom revolution took hold. The whole family started playing and chasing the Spatula Monster. Family time like this has helped Tucker start to talk. OK, often it’s more like grunting. But he’s bonding with his brothers and sister who he rarely gets quality playtime with during the school year. Instead of watching from the outside, he’s joining in, holding his brothers’ hands when they wake him from his afternoon nap and laughing along as they chase each other — with the spatula.

REAL camp is full of bonding and imagination-building, too. Don’t let me stop all the happy campers — parents at home included — from having a good time. Just don’t underestimate the beauty of being bored with your very own family — even if it’s just a few hours in the morning or evening each day. What I learned is when you take time to just be with each other, you can discover a part of you and your family that you may never have noticed.

I will admit I’ve had a few panicked moments when I’ve questioned my choice — and my sanity — to enroll in Camp Boredom. Looking back, the reasonings were rather pathetic. Nine out of 10 times it’s because I’m tired of the mess that comes with creativity.

Then just last week, I went to bed in a sweat, wondering if I’ve denied my children of a life grander than guinea pigs. They will never have a chance to play professional — perhaps even Varsity — sports now, I nearly cried myself to sleep. God help the Millers be able to throw a ball — any ball, I prayed.

But the next morning, I came downstairs only to find my two oldest boys playing with their guinea pigs, Fuzzy and Digger, feeding them carrots before they fed themselves. Starting their morning tending to someone else’s needs. That’s love.

No, my kids may never throw a ball like Babe Ruth. But if they can dream big and love deeply, that is a life well lived. This summer of intentional boredom has turned into much more than a camp. It’s become a chance for me and my family to slow down. And a life that isn’t rushed — a life where a family is center — is a life that is a whole lot richer!